The Holy Rosary of Saint Joseph

Any­one who wants to ven­er­ate St Joseph can also please him by pray­ing the Rosary. There is also an audio record­ing of it (in Ger­man) in which the Sword-Bish­op is lead­ing the prayer. To be obtained at www.neuchristen-onlineshop.com 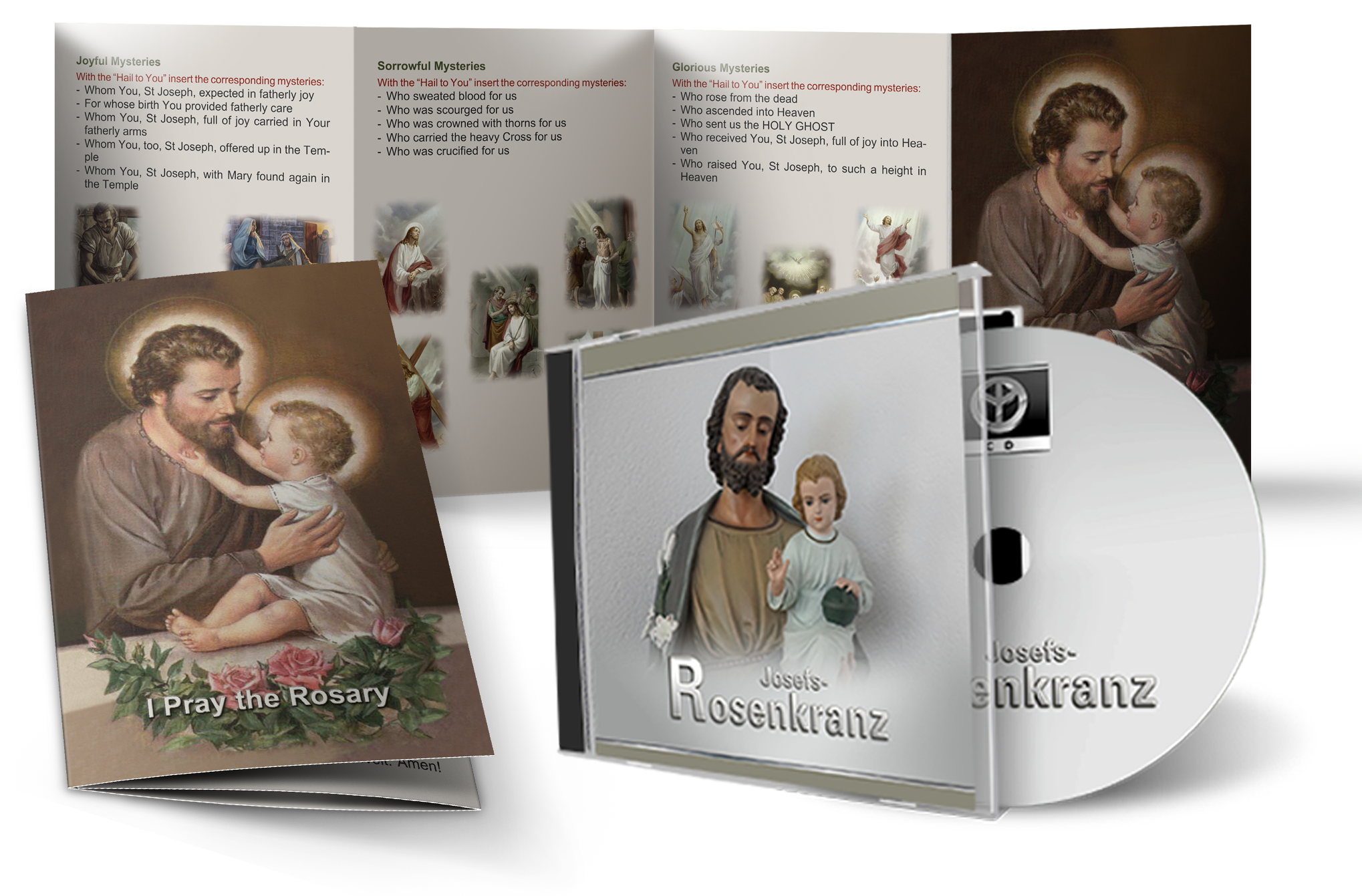 In the Name of the † FATHER and of the SOHN and of the HOLY GHOST. Amen!

I believe in GOD, the FATHER Almighty, Cre­ator of Heav­en and earth, and in JESUS CHRIST, His only-begot­ten SON, who was con­ceived by the HOLY GHOST, born of MARY, the Vir­gin, suf­fered under Pon­tius Pilate, was cru­ci­fied, died and was buried, He descend­ed into hell, the third day He rose again from the dead, He ascend­ed into Heav­en, sits at the right hand of the FATHER in com­mu­nion with the HOLY GHOST, from thence He shall come, to judge the liv­ing and the dead.

I believe in the HOLY GHOST, the LORD and Giv­er of life, who, like the FATHER and the SON, is adored and glo­ri­fied.

I believe in the one, holy, apos­tolic Church found­ed by JESUS CHRIST, with the sev­en holy Sacra­ments institu­ted by Him.

I believe in the com­mu­nion of Saints, the for­give­ness of sins, the res­ur­rec­tion of the flesh, and the life of the world to come. Amen!

Glo­ry be to the FATHER, to the SON, to the HOLY GHOST, as it was in the begin­ning, is now and always and to eter­ni­ty. Amen!

Our FATHER, You who are in Heav­en! Hal­lowed be Your Name! Your King­dom come! Your will be done on earth as it is in Heaven!

Give us this day our dai­ly bread; and for­give us our debts, as we also for­give our debtors. And in temp­ta­tion let us not fall, but deliv­er us from evil!

For Yours is the King­dom and the pow­er and the glo­ry from eter­ni­ty to eter­ni­ty. Amen!

The first three “Hail You, Saint Joseph” with the following additions:

Hail You, Saint Joseph, beloved Fos­ter Father of JESUS CHRIST and and GOD-cho­sen Spouse of Mary. You are full of graces because the LORD is with You, You Blessed One amongst the Saints, and blessed is Your Fos­ter Son, JESUS:

Saint Joseph, pray to Your divine SON for us sin­ners, now and at the hour of our death. Amen!

After each “Glory Be”:

O my JESUS, for­give us our sins, save us from the fires of hell, lead all souls to Heav­en, espe­cial­ly those in most need of Your mer­cy. Amen!

Our FATHER, You who are in Heaven! …

5 “Hail You” with the corresponding additions

The second up to the fifth fiver follow likewise. 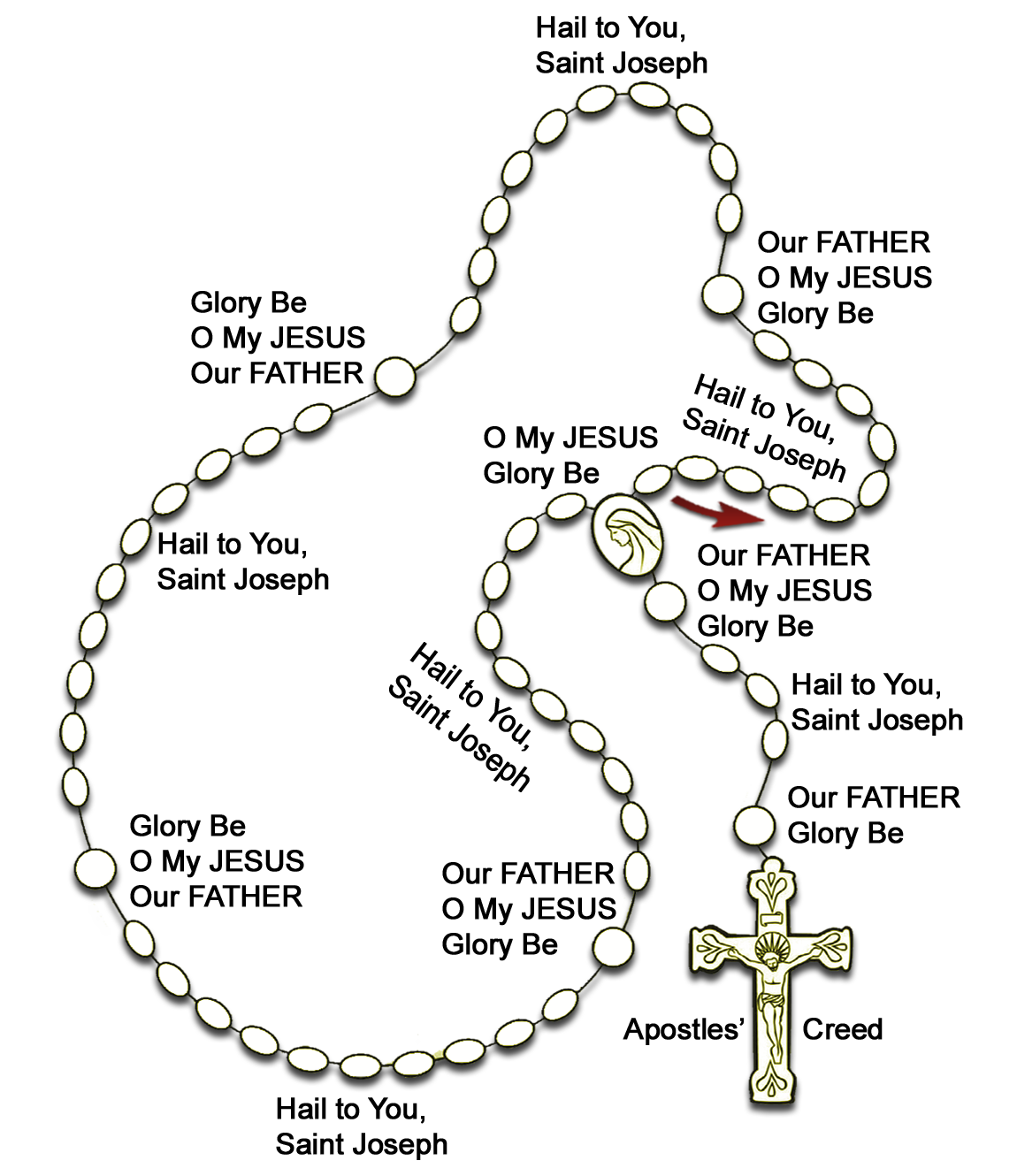